This once more isn’t much of an intro, Gina have been around for quite some time now. It is however a designer that is quite unique and therefore is very worthwhile to mention. With it’s slightly ostentatious reputation of for producing Swarovski encrusted sandals popular with the Arab oligarchy, Gina is definitely a designer that has a divisive reputation. I’m not one for glitzy shoes all the time and much of my collection are classic styles, however with careful selection I have found Gina have some really appealing shoes. 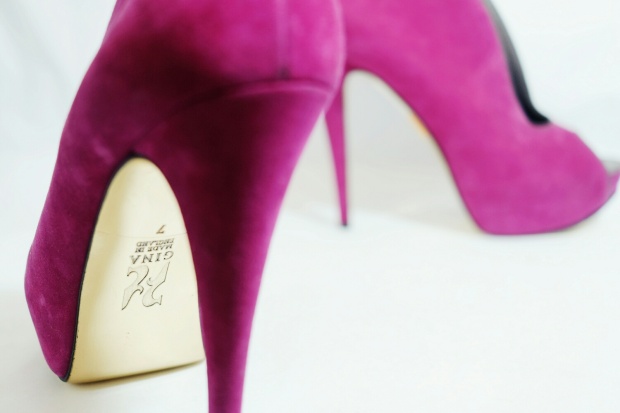 Gina, but with subtlety.

The style that Gina is often associated with, great for the red carpet however hardly everyday wear.
Image by Garry Knight used under Commons License

Named after Gina Lollobridga and inspired by, the glamorous Jet Setting actress of the 1950s and 60s, Gina the shoe maker was founded in 1954 in London by master shoemaker Mehmet Kurdash, where to this day it still operates. This sets Gina apart from the rest of the shoe industry, even French Haute Couturiers conceded that Italy is home to the greatest cordwainers in the world, and most of the Paris houses have moved production to Italian factories. Meanwhile in Britain most shoemakers have folded or sold up and the designers who remain almost exclusively produce in Italy, most notably Rupert Sanderson went even to the extent of acquiring his own factory in Italy.

Gina Lollobridiga was the glamorous jet setter of the day, starring opposite the likes of Alec Guinness and Frank Sinatra during the 50s and 60s.
Image by Ivo Bulanda used under Commons License

Yet when we look back into history we find that Britain has a very strong tradition in crafting fine leather products. This can be seen in the many men’s shoemakers and cobblers of Northampton, the home of Doctor Marten, as well as the London tradition of cordwaining (the art of crafting soft leather products), with the still extant Worshipful Company of Cordwainers representing the craft as a Livery Company of the City of London.

To this end, Gina is the only prominent women’s shoe manufacturer that remains in the UK, all this heritage and tradition is thankfully being carried on by a group of artisans at their London factory. Furthermore the UK is seeing a revival in the art of cordwaining, with many new factories being launched in the past decade often in the face of adversity within their own industry.